The concert DVD “Atlanta Rhythm Section: Live at the Stabler Arena” was captured in December 2003 at the Stabler Arena in Bethlehem, Pennsylvania. Atlanta Rhythm Section is one the great classic/southern rock bands (think of “Spooky”, “Imaginary Lover,” “Not Gonna Let it Bother Me Tonight,” “Champagne Jam,” “So Into You”, etc.) who were at the height of their popularity in the mid/late 1970′s and early 1980′s. They’ve remained together over the years and still perform all across the country. The “Live at the Stabler Arena” production was the last officially recorded video of the band before Barry Bailey, world class lead guitarist and musical icon for the band, decided to retire.

This post discusses the production logistics, camera configurations, and equipment used to capture the show. Subsequent articles will cover details of the audio recording/mixing, video editing, and camera synchronization. 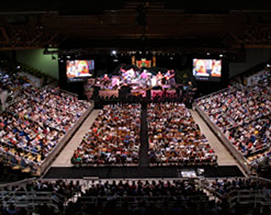 The Venue and Performance:

The performance took place at a large, 6,000 person, arena called the Stabler Arena on the campus of Lehigh University in Bethlehem, Pennsylvania. The venue is a multi-level arena with a large stage and extensive audio mixing set up. The band performed two unique sets (i.e. no overlapping songs between the sets). Both sets were captured fully using multiple cameras and the audio was captured using a mobile multi-track digital audio recording system for later editing/mixing.

Camera Configuration: The video capture was done with 4 cameras (overall camera configuration is shown to the right).

Camera 1: This camera provided a nice wide shot of the entire stage and also served as a fixed (“safety”) camera. It was positioned at the rear of the arena and was zoomed to cover the width of the stage (cutting out any unnecessary side items), but remained as a static/fixed shot.

Camera 2: This camera was fixed but actively operated. This camera provided both nice wide shots but also provided panned/zoomed shots on key action. This camera was located toward the rear of the arena (near the sound tables) and was mounted on a strong, fluid head, tripod – allowing the camera motion to remain smooth as the camera was positioned to capture key moments.

Camera 3 and 4: were fully mobile/roaming/hand-held cameras – able to move anywhere in front of and on the stage. Camera 3 remained in front of the stage while Camera 4 covered the front of the stage and also moved onto the stage at times to capture key shots. These onstage shots included closeups of the keyboard player (singing and hands on keyboard), closeups of the drummer (since this production did not use a fixed camera on the drummer), and key guitar solos and closeups of other performers as appropriate. Both Camera 3 and Camera were mounted on mono-pods – to allow the operators to capture solid shots and to reduce physical strain during the performance.

The musical set list for the performance was well known by all camera operators. Pre-production meetings had been held to “strategize” on what shots would be captured by each camera. But, outside of the general strategy outlined for the overall production, each camera operator had discretion to capture the shots they thought would would be optimum. Part of the pre-production meetings included trying to make sure that redundant shots were not captured. All of the raw video content was then taken back to an editing system in Washington DC where it was pulled together into a final sequence. 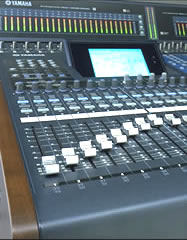 When discussing the logistics of doing the production, ARS’s legendary record producer, Buddie Buie, commented that “the most important thing about a concert video is the audio.” His logic was that if the audio is great, people might tolerate bad video, but if the audio is bad, it won’t matter if the video is fantastic – people won’t want to watch a concert video if the audio doesn’t sound great. A very good point and so audio was captured using a mobile multi-track recording system (using a mixing board and digital recording system) so that the tracks could be mixed down later – in post production.

Example Production: See a song from this production:
Atlanta Rhythm Section (ARS) – Back Up Against the Wall: